Recognizing that the voices of women continue to be underrepresented in discussions of key policy issues facing both Japanese and American societies, JCIE launched the US-Japan Women Leaders Dialogue in 2017 as part of the Empowering Women Leaders Program  to convene women leaders from varying walks of life. The dialogue is intended to bring women’s perspectives more fully into the discourse on US-Japan relations, but also to explore how women can overcome the obstacles they face in their respective careers as they seek to make their voices heard on a more sustained basis, and to foster closer connections among leaders in the two countries.

The first dialogue was held at the beautiful Pocantico Conference Center of the Rockefeller Brothers Fund, with support from the Henry Luce Foundation and the Japan–US Friendship Commission. It included five members of a Diet delegation traveling to the United States on JCIE’s Parliamentary Exchange Program, including Internal Affairs Minister Seiko Noda, the highest-ranking woman presently serving in the Japanese Cabinet. A group of 25 inspirational women (and a few men) from the political, business, think tank, academic, media, and philanthropic sectors joined to discuss ways to advance women’s leadership in domestic politics and business, work-life balance, and broader issues of policy concern: the US-Japan alliance and promoting stability in Asia Pacific, US-Japan cooperation in supporting the international order, and the shared challenges of globalization and economic populism. 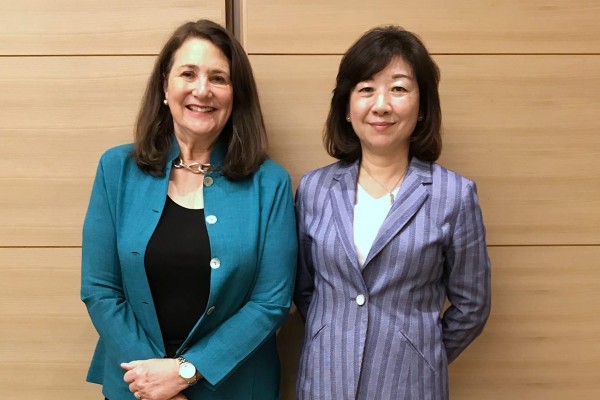 A roundtable on recent developments in women’s issues was held, taking advantage of a visit to Japan by Dialogue Co-chair Rep. Diana DeDegette (D-CO). This was followed by a smaller lunch meeting that… JCIE is holding the 2022 US-Japan Women Leaders Dialogue, a three-part virtual discussion bringing together more than 40 women leaders from across multiple sectors from the United States and Japan. Th… A report on the 2021 US-Japan Women Leaders Dialogue, held virtually in March–April 2021, featuring a series of recommendations based on the discussions among 40 women from politics, business, media,… Highlights of a two-day discussion among American and Japanese women leaders on the shared political, security, and societal challenges facing their countries and on ways to advance women’s leadership… JCIE held the first US-Japan Women Leaders Dialogue to convene top women leaders from varying walks of life in both countries, including four diet members of a Diet delegation traveling to the United… Hosted by the Council of Foreign Relations, 2017’s Tadashi Yamamoto Memorial Seminar featured a panel of four up-and-coming Diet members who discussed the difficulties they face in participating as wo…

The launch of this dialogue program was made possible through the generous support of the Henry Luce Foundation and the Japan-US Friendship Commission.