In the three years since Japan’s Northeastern Tohoku region was devastated by a massive earthquake, tsunami, and nuclear meltdown, people in the United States have donated $730 million to assist with the disaster response. This figure—which comes from JCIE’s third annual survey of nearly 1,200 nonprofit organizations, corporations, and fundraising campaigns—makes the outpouring of US giving for Japan the largest philanthropic response ever in American history for an overseas disaster in another developed country, and the third largest for any overseas disaster.

Who raised funds for Japan?

Around the United States, thousands of community groups, churches, schools, and individuals launched fundraising drives to support relief and recovery efforts. In most cases, the donations they collected were entrusted to larger nonprofit groups with overseas experience, which then sent the money to Japan. Donations thus often passed through several US organizations before being distributed to Japanese groups active in the disaster zone. 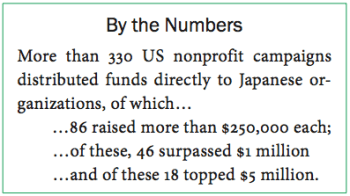 Compared with prior overseas disasters, the diversity and number of American groups directly distributing funds to Japanese counterparts were staggering. More than 330 US nonprofit organizations—typically groups that aggregated donations collected by smaller fundraising campaigns—went through the process of identifying, evaluating, and then transferring funds directly to Japanese organizations involved in the disaster response. More than 120 of these groups sent more than $100,000 to Japan, and 46 of them collected more than $1 million.

The bulk of the funds channeled to Japan were raised by established humanitarian organizations such as the American Red Cross and Save the Children, in large part because they are well known by the general public and accustomed to mobilizing quickly to collect funds for disaster responses. Significantly, 8 out of the 10 humanitarian organizations that raised the most for the Tohoku response had affiliates or preexisting programs in Japan. For instance, the American Red Cross arranged to give funds to the Japanese Red Cross, World Vision could quickly reach out to World Vision Japan, and Mercy Corps already had an established relationship with Peace Winds Japan. Several of these groups went so far as to dispatch personnel to Japan to oversee the distribution of funds, although far fewer than would normally be the case for a disaster in a developing country.

Notably, 5 of the 10 groups that collected the most in donations for Japan are faith-based organizations, such as Catholic Relief Services and Samaritan’s Purse. Combined, faith-based organizations raised more than $135 million for the disaster response. Many of these groups had few historic ties to Japan; for instance, a handful of Jewish charities collectively raised more than $4.4 million, while Islamic Relief USA collected almost $270,000 for the response.

More than 75 organizations that focus on various aspects of US-Japan relations also mobilized to launch relief funds. Together, they channeled nearly $50 million in donations to Japan. While they had limited experience with disaster fundraising, they proved particularly adept at identifying indigenous Japanese nonprofits that were working on important issues in the disaster zone and that were harder for more broadly gauged humanitarian organizations to support.

What distinguished the response?

In addition to its sheer size, the US philanthropic response to the Japan disaster was unique in that it seemed to be driven in large part by the personal connections that many of the donors and fundraisers had to Japan. After the 2004 Indian Ocean tsunami, former Presidents Bill Clinton and George H. W. Bush joined President George W. Bush at a White House press conference to call for Americans to give generously to help with the response. A similar tack was taken by President Obama for the 2010 Haiti earthquake. However, since Japan is not a developing country, there was no concerted top-down effort to mobilize private funding; rather, the response was more of an organic, grassroots phenomenon.

Many fundraising initiatives drew on the web of ties forged through cultural and grassroots exchanges between the two countries. The network of Japan-America Societies around the United States played a particularly prominent role as its 36 societies collected more than $27 million for the response. Similarly, young alumni of the Japan Exchange and Teaching Program (JET Program), who had taught in Japanese public schools, raised more than $330,000 for Japanese responders. Nearly 100 US towns and cities that have Japanese sister cities organized fundraising campaigns. Also, a wide range of professional associations mobilized to raise funds for their Japanese counterparts, with which they had built ties through international conferences and professional exchanges. For example, the American Dental Association gave $63,000 to the Japan Dental Association, the American Nuclear Society raised $245,000 to support Fukushima plant workers affected by radiation, and the American Library Association even created a fund to help the Japan Library Association support the rebuilding of libraries. 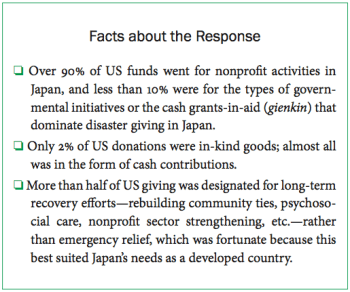 Ethnic ties also played an important role, as the Asian American community mobilized for relief efforts. For their part, Japanese American groups raised more than $14 million. Perhaps more surprising, numerous Chinese American and Korean American community groups—reportedly more than 350 Korean American groups in the New York area alone—held fundraisers to support Japan, including many groups that have been vocal in their disagreement with the Japanese government on territorial disputes and history issues. This was one case in which personal ties and compassion counted more than old grievances. In a statement that reflected the general sentiment at the time, the president of the Korean American Federation of Orange County was quoted as telling the Korea Times, “We still have issues surrounding [the islands of] Dokdo, but now it isn’t the time to gripe over that…. First comes first, we must extend support to people in dire need.”

What is happening today?

Three years on, almost all of the major US fundraising campaigns for Japan have been closed down, and the bulk of the funds raised by American organizations has been disbursed to Japanese nonprofits and fully expended. Most of the US organizations that dispatched staff to Japan have returned to their normal programming as their Japan funding was spent down, although a few that have particularly innovative programs in the Tohoku region are still seeking support to continue them. Meanwhile, a number of American groups with special ties to Japan—typically organizations dedicated to US-Japan exchange—continue to raise funds for the disaster response, even though the flood of donations has slowed to a trickle. 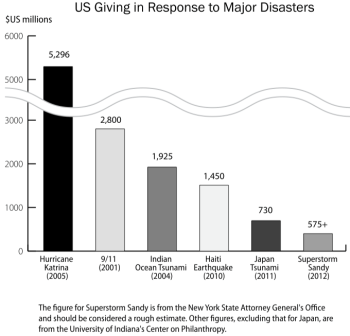 In the disaster zone, both national officials and local residents have praised the Japanese nonprofit organizations that were buoyed by overseas funding for playing an invaluable role. They continue their work to support the recovery, and it seems clear that they will be needed for years to come. However, while these groups saw a large upswing in funding in the first two years after March 2011 as overseas contributions came to comprise a sizeable portion of their budget, they are now struggling to fill the funding gap that has emerged as overseas support winds down—an uphill battle because Japan’s domestic philanthropic sector remains underdeveloped.

Clearly, one of the important legacies of overseas funding, particularly US funding, will be the way in which it has enabled these Japanese nonprofits, including many brand new ones, to expand their activities and make a major difference in the lives of people in the Tohoku region’s devastated communities. Also, many experts believe that they will continue to benefit from the institutional capacity they have developed through their responses to the 3/11 disaster, although the degree to which they will retain this capacity remains to be seen. Finally, another likely result—and one that holds considerable promise for the future of US-Japan relations—appears to be the forging of new ties between Japanese and American groups, particularly between humanitarian organizations and philanthropic intermediaries on both sides of the Pacific, which can provide the foundation for deeper cooperation in the years ahead.

This report updates earlier JCIE surveys published since March 2012. JCIE staff in New York and Tokyo have gathered information from nearly 1,200 American and Japanese organizations: 647 US nongovernmental organizations, 462 US corporations, 52 of Japan’s leading nonprofit organizations, and 9 Japanese consulates that accepted funds from American donors. Information was collected via telephone, e-mail, and online research to come up with an aggregate total for US giving for the 3/11 disaster.

The estimate includes corporate donations, foundation giving, and individual donations through US-based organizations. It counts funds that are disbursed or committed to Japan, and it excludes contributions from US government agencies. Since donations tend to pass through multiple organizations’ accounts while being channeled to groups working on the ground in the disaster zone, special attention was paid to minimizing the potential for doublecounting of donations.