In the two years since Japan was struck by an earthquake and tsunami of apocalyptic proportions, Americans have donated $712.6 million to help with relief and recovery efforts. These figures, which come from a survey conducted by the Japan Center for International Exchange (JCIE), indicate that the outpouring of US giving is the largest ever for a disaster in another developed nation, and the fifth most generous US response to any disaster in history. 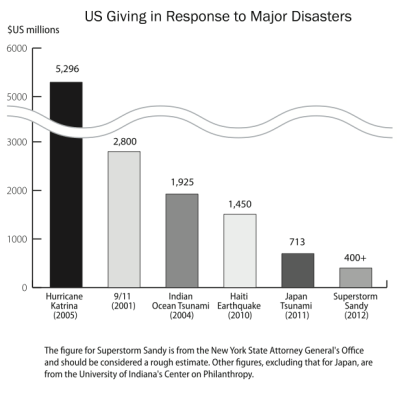 Two years ago, on March 11, a 9.0 magnitude earthquake off the coast of Japan’s Tohoku region triggered a tsunami with waves reaching as high as 131 feet, devastating more than 400 miles of coastline and precipitating a nuclear meltdown at the Fukushima Daiichi Nuclear Power Plant. As a result, more than 18,000 people lost their lives and almost half a million fled their homes. Even today, over 300,000 people remain displaced. The searing video footage and tragic stories that emerged after this so-called “triple disaster” touched heartstrings around the world, and people from all corners of the globe demonstrated extraordinary sympathy for and solidarity with the people of Japan. In the end, many gave generously, and the most generous of all were those in the United States, whose donations far surpassed those from any other country, even the remarkable responses from Japan’s neighbors, Taiwan and South Korea.

In the weeks and months immediately following the disaster, American newspapers were full of headlines such as “US Donations Not Rushing to Japan” and “Americans Less Generous in Japan Disaster Relief.” However, the data collected by JCIE indicate that the factors that led observers to underestimate Americans’ generosity actually were reflections of the remarkable strength and depth of the US response. Rather than doing what was commonplace for prior disasters and simply sending donations to a small number of well-known charities where fundraising tallies could easily be tracked by media outlets and other organizations, tens of thousands of Americans organized small fundraisers of their own, then spent considerable time deliberating over where their funds could be best used. Meanwhile, hundreds of groups with some connection to Japan but little experience in disaster fundraising—and thus off the radar screen of those who track disaster philanthropy—decided to launch campaigns of their own so they could channel funds to Japan. As a result, while thousands of churches, schools, and community groups were conducting local fundraising campaigns, the immense scope of this outpouring was not immediately apparent. 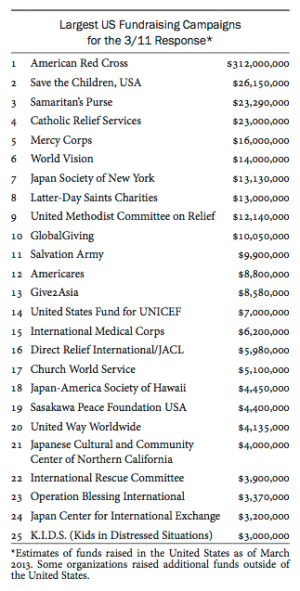 This response reflected the strength of the grassroots ties that have developed between Japan and the United States over the past several decades. While the generosity that was shown after the Indian Ocean tsunami and the Haiti earthquake was magnified by the awareness that many of the victims were impoverished, the American response to the disaster in much wealthier Japan seems to have been motivated more by personal ties. In many instances, fundraising campaigns were driven by people who had connections to Japan through overseas study or from working in the country through programs such as the Japan Exchange and Teaching Program, and for others it came from their affinity for Japanese anime, sports, language, or traditional culture.

One telling indicator of the level of people-to-people ties is the fact that 65 different organizations dedicated to various aspects of US-Japan exchange raised roughly $50 million for relief and recovery efforts. This included 40 Japan-America Societies around the country as well as dozens of other organizations that focus on intellectual, cultural, and business exchange with Japan. Even more telling is the fact that nearly 100 US cities and towns with sister cities in Japan organized fundraising campaigns, collecting more than $2.4 million in honor of their counterparts in Japan.

A Broad Range of Responders

One noteworthy characteristic of the US response is the extraordinary breadth and diversity of the American groups that undertook major efforts to help with Japan’s disaster response. Thousands of US organizations raised funds and more than 330 played a significant role in channeling donations to Japanese groups, typically meaning that they amalgamated funds for other groups before relaying them to Japanese organizations working on the ground. Stunningly, 47 different groups raised more than $1 million apiece, and 17 of those collected more than $5 million each.

One noteworthy characteristic of the US response is the extraordinary breadth and diversity of the American groups that undertook major efforts to help with Japan’s disaster response. Thousands of US organizations raised funds and more than 330 played a significant role in channeling donations to Japanese groups, typically meaning that they amalgamated funds for other groups before relaying them to Japanese organizations working on the ground. Stunningly, 47 different groups raised more than $1 million apiece, and 17 of those collected more than $5 million each.

Context and Impact of US Giving

In the immediate aftermath of the disaster, a handful of American commentators with limited knowledge of Japan advised against donating because Japan is a rich country. However, they overlooked the fact that, while Japan is a rich country, its nonprofit sector is relatively poor and underfinanced. US donations ended up having an outsized impact precisely because the funding base of Japanese nonprofits has traditionally been so limited and because these nonprofit organizations play such a crucial role by performing services that government agencies cannot manage, thus filling the gaps in the disaster response.

The Rise of Asian-American Giving

The prominence of Asian-Americans in the US response was especially notable. Japanese-Americans and other Asian- Americans played key roles at many of the humanitarian and philanthropic organizations that raised funds for the disaster. In addition, many Asian-American groups launched their own fundraising campaigns.

However, other Asian-American organizations also mobilized out of concern for those suffering in Japan. At least 40 Chinese- American and Korean-American groups were involved in fundraising activities, as well as a handful of groups for people with ties to Southeast Asia, and a number of these groups launched their own Japan relief funds.

Giving Japan 2012, the annual almanac that provides the most definitive data on Japanese giving, estimates that by the end of September 2012, Japan’s domestic donations for the disaster response were approximately ¥600 billion (US$6.7 billion), but nearly 85 percent of these contributions were made to national and local government agencies or to the country’s traditional gienkin funds that provide cash payments directly to survivors. Only a portion of the remaining donations, some of which originated overseas, were directed for the use of nonprofit organizations.

In contrast, roughly 90 percent of the funds raised in the United States—approximately $640 million—supported nonprofit activities. The Giving Japan survey probably undercounts domestic giving to nonprofits, but nonetheless, all of the data available suggest that as much as one-quarter to more than one-third of the total amount of donations available to Japanese nonprofits ultimately came from American donors, a staggering amount.

Moreover, in many cases this funding went for initiatives that were more long-term in nature rather than just emergency relief, helping to ensure that the recovery could be more sustainable. For example, 17 percent of US funding was directed toward projects designed to help rebuild community ties, 12 percent went for work involving psychosocial care and counseling, and 11 percent supported efforts that included a component of nonprofit capacity building or volunteer mobilization.

In the end, nonprofit organizations on the ground played a more prominent role in this disaster response than ever before in Japan, carrying out a wide range of activities that were beyond the capacity of government agencies to tackle. Seeing how much of the resources for their activities came from US donations, it is clear that US-Japan grassroots ties and the massive outpouring of private US giving have made significant contributions to the Tohoku region’s recovery efforts.

JCIE staff in New York and Tokyo gathered information from 963 American and Japanese organizations—455 US nongovernmental organizations, 450 US corporations, 51 of Japan’s leading nonprofit organizations, and 7 Japanese consulates that accepted funds from American donors—via telephone, e-mail, and online research to come up with an aggregate total for US giving for the 3/11 disaster. The estimate includes corporate donations, foundation giving, and individual donations through US-based organizations. It counts funds that are disbursed or committed to Japan, and it excludes contributions from US government agencies. Since donations tend to pass through multiple organizations’ accounts while being channeled to groups working on the ground in the disaster zone, special attention was paid to minimizing the potential for double-counting donations. Finally, a foreign exchange rate of US$1=¥80 was used for calculating the yen value.